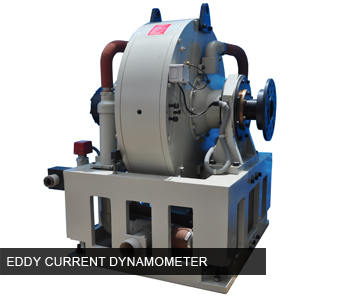 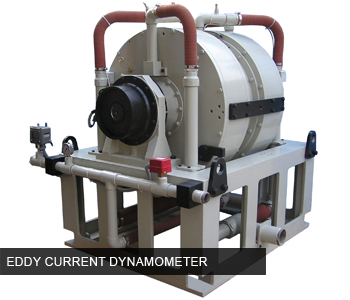 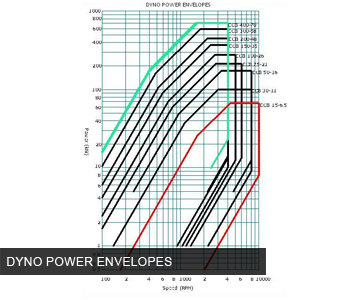 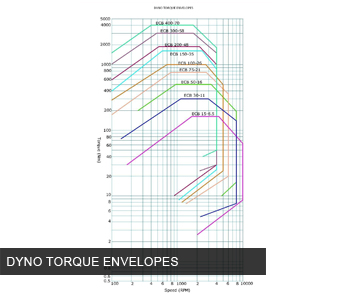 The construction comprises a casing (Stator assembly) that houses the field coil and cooling chambers. A thin spoked steel rotor revolves in the casing. The stator assembly is mounted on a sturdy MS fabricated & machined base-frame supported by trunnion bearings.

When the excitation current is passed thru the coil, a magnetic-flux field is formed. An equal and opposite magnetic field is induced in the heat exchanger walls facing the rotor and this field is of a pulsating form corresponding to the frequency of the passing rotor spokes. This changing field produces eddy currents in the heat exchanger walls, which oppose the excitation field, thus causing retarding action to be imposed on the rotor. The magnetic flux lines developed in the rotor are parallel to the axis and therefore the thickness of the rotor is minimized, resulting in a low moment of inertia.

The function of water passed through cooling chambers is heat dissipation only and it does not come in contact with the rotor assembly. Hence, control of load depends entirely on the level of excitation and therefore fluctuations in pressure and flow of water have no effect whatsoever on the stability of load absorption as water is used for cooling purposes only.

The dynamometer is BI-DIRECTIONAL, DRY GAP TYPE. In a dry-gap unit, the only resistance to movement of the rotor is that of bearing friction and the small effect of windage. With zero excitation, an almost no-load condition can be achieved over the entire speed range.

The Dynamometer is provided with following safety features: